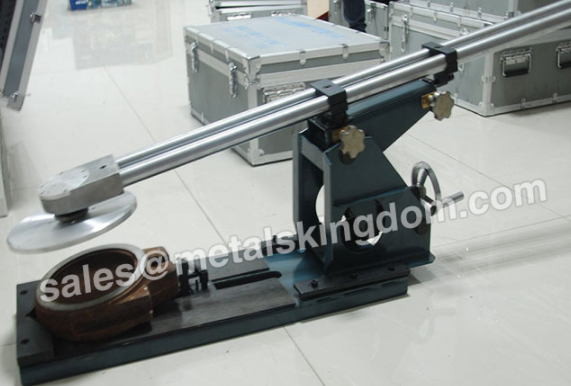 Valve after long-term use, the valve and seat sealing surface will be worn, tightness reduced. Repairing the sealing surface is a large and important task. The main method of repair is grinding. The seal surface of serious wear is first welded by turning to process and then grinding.

The purpose of grinding

Valve function is not fully realized mainly due to internal leakage, external leakage, drive mechanism failure and other reasons. External leakage and drive mechanism failure can be eliminated by replacing the gasket and finding the cause of the failure. Valve internal leakage accounts for a larger proportion of corrective maintenance work of the valve, the main reason is the sealing surface defects, but does not exclude other types of causes, such as whether the valve closing torque is sufficient, whether the closing air pressure is sufficient, whether there are foreign objects stuck in the sealing surface and other factors that can be easily judged and excluded. Only when these factors are confirmed to be normal, the sealing surface problem is considered and the valve is disassembled for inspection.

Commonly used grinding materials are abrasive cloth and abrasive paste. Abrasive cloth is a fabric backing with grit glued on top. The abrasive paste is made of lubricant and an abrasive blend. The lubricant can be used as machine oil, kerosene, butter, glycerin, oleic acid, stearic acid and paraffin wax, etc.

Valve and seat sealing surface due to different degrees of damage, can not be directly on the research. Rather, a certain number and specifications of the specialist prior to the fake valve flap (i.e., grinding head), fake valve seat (i.e., grinding seat), respectively, the valve seat, valve grinding. The grinding head and grinding seat are made of ordinary carbon steel or cast iron. Size and angle should be placed on the valve, valve seat equal.

If the grinding is carried out manually, it is necessary to configure various grinding rods. The grinding rod and research tool should be properly assembled, can not be skewed. To reduce human labor intensity, speed up the grinding speed, often using an electric grinder or vibration grinder grinding.

Items to check when deciding to grind:

ㆍVisual inspection is performed immediately after the valve door is opened and before cleaning. This will provide a very accurate indication of the valve grinding operation.

Valve and seat sealing surface pockmarks, scoring, when the depth of 0.5mm or less, can be repaired using grinding methods. The grinding process is carried out in three steps: coarse grinding, medium grinding, and fine grinding.

After the middle grinding, the sealing surface basically meets the requirements, and the surface is flat and bright. Fine grinding is done by hand, the valve and valve seat on the valve directly to the grinding. Choose a fine grinding paste (abrasive particle size W14~W5), and a little oil dilution, first clockwise and then counterclockwise, gently grinding back and forth. Grind for a while to check once, until grinding shiny, and can be seen in the valve and valve seat sealing surface of a circle of the black bright closed belt. Finally, gently grind several times with machine oil and dry with clean cotton yarn. When using abrasive cloth grinding, the abrasive cloth should be fixed on the grinding tool made according to the shape and size of the valve flap and valve seat. For large gate valve gates, usually use the scraping method to repair. When scraping and grinding the gate plate on the grinding plate with the coloring method, scraping the uneven parts until every 25px2 contact point reaches more than two points. Then scrape the good gate coloring scraping valve seat, the contact point should also reach every 25px2 contact point to reach more than two points. Welded-in the pipeline gate valve and shut-off valve, it is necessary to special research gate machine grinding repair. 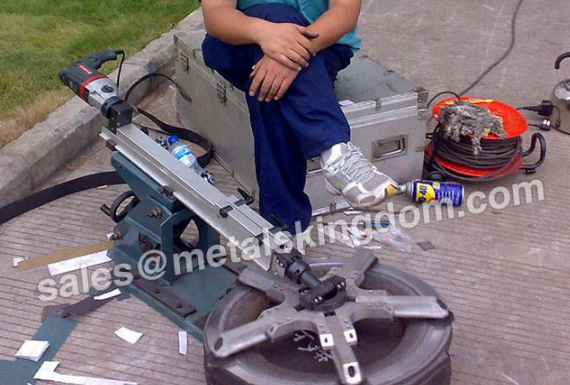 Blue oil test is the most common and convenient test method, mainly to check the sealing surface fit, the thinner the coating of blue oil the better, for the wedge gate valve blue oil test, pay special attention to.

Use the knife mouth ruler to check the flatness, the actual light transmission method of inspection, you can visually observe the flatness.

Monochromatic light interference method is as follows: a lens flat on the sealing surface, next to the incident beam of monochromatic light (such as sodium lamp), the human eye above the lens to observe the appearance of light interference stripes. Principle: The incident light is monochromatic light, so the wavelength is the same. The light is reflected on the upper surface of the lens, and at the same time through the lens to reach the sealing surface and then reflected again, and then shot through the lens. The two rays interfere with each other. If it happens that the crest meets the crest, the brightness is the strongest, and if it is the crest that meets the trough, the brightness is the darkest. The brightest and darkest then form an interference fringe. The difference in height between two adjacent bright stripes is half a wavelength, and the same stripe has the same height. In this way, the flatness and roughness of the seal surface can be quantitatively evaluated by counting the interference fringes.

Risk of over- and under-grinding

Grinding should only be performed when the valve's sealing properties must be ensured by grinding.

Unnecessary grinding can lead to:

ㆍShortened valve life due to removal of some hard surfaces

ㆍHigh dose exposure due to working in high radiation area

Over-grinding can lead to:

Excessive grinding will destroy the thickness of the carbide layer on the sealing surface, which will accelerate the wear of the sealing assembly and reduce its service life.

Insufficient grinding does not effectively eliminate the defects to meet the sealing requirements of the equipment, and the residual defects will expand during operation and lead to the scrapping of the entire seal assembly.

What is the Correct Maintenance Method for Portable Pipe Beveling and Cutting Machine?
Related products
Navigation
Contact Us